A dark comedy about gentrification and the intersecting lives of the people in it.

On the tipping point of gentrification, a close-knit Atlanta community is forced to integrate with wide-eyed opportunists, both striving for their own self-preservation on a path that’s not always black and white.

Intersection is a dark comedy, written in a diverse, all-female writer’s room and produced with a cast and crew of over 80% female and BIPOC. 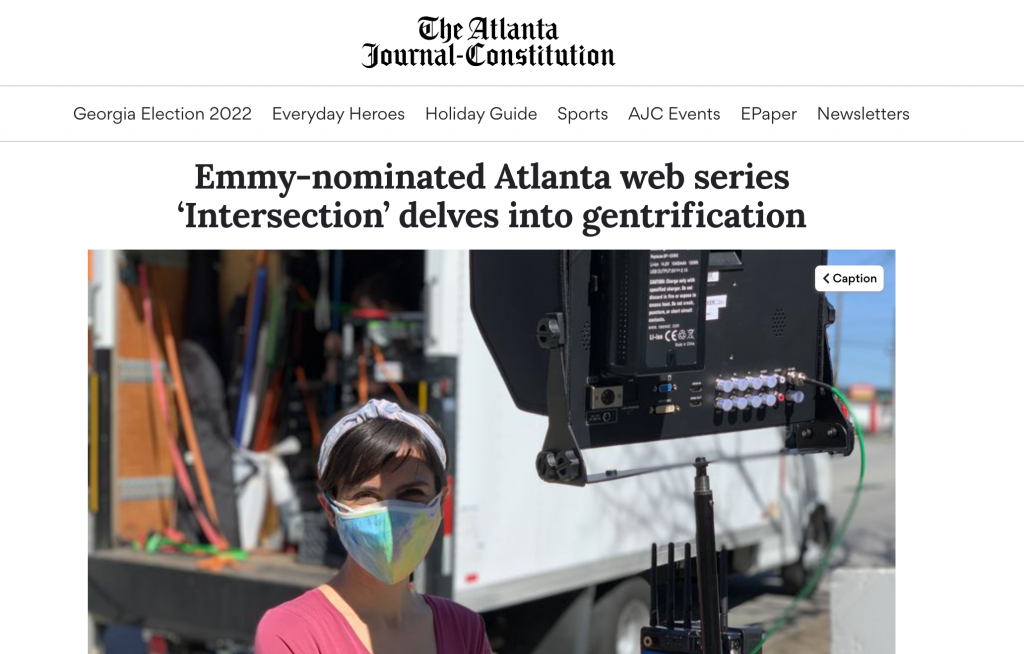 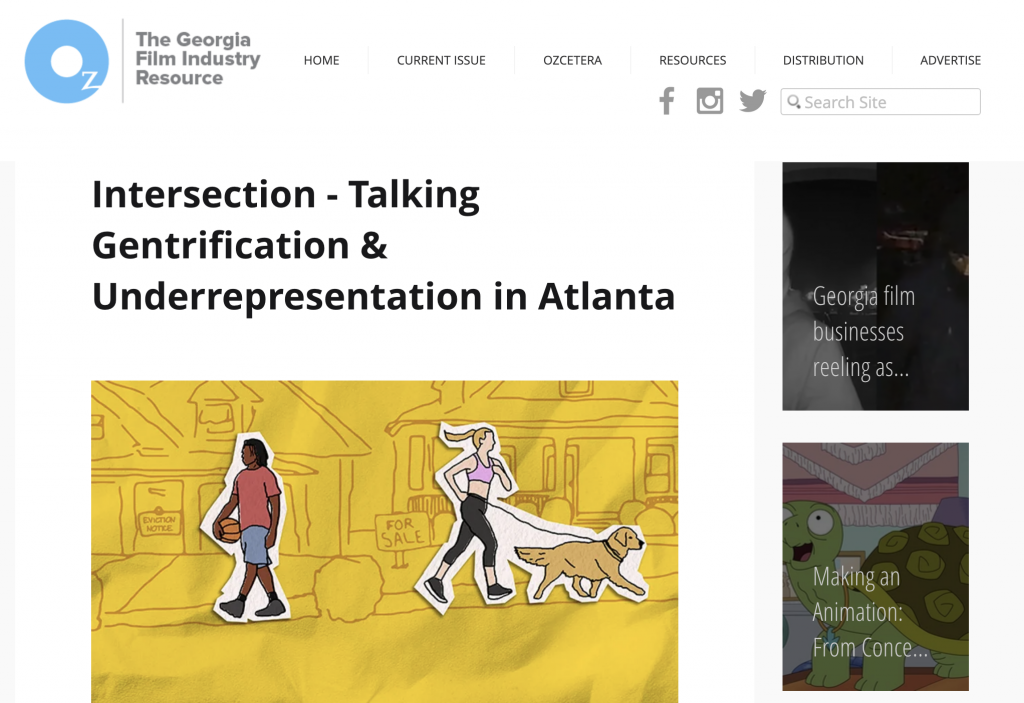 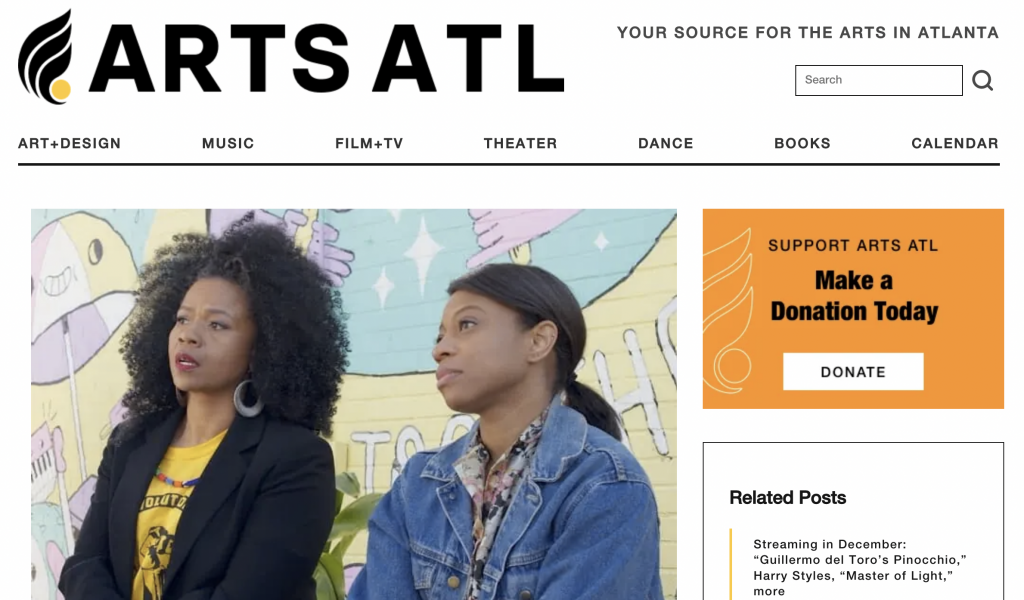 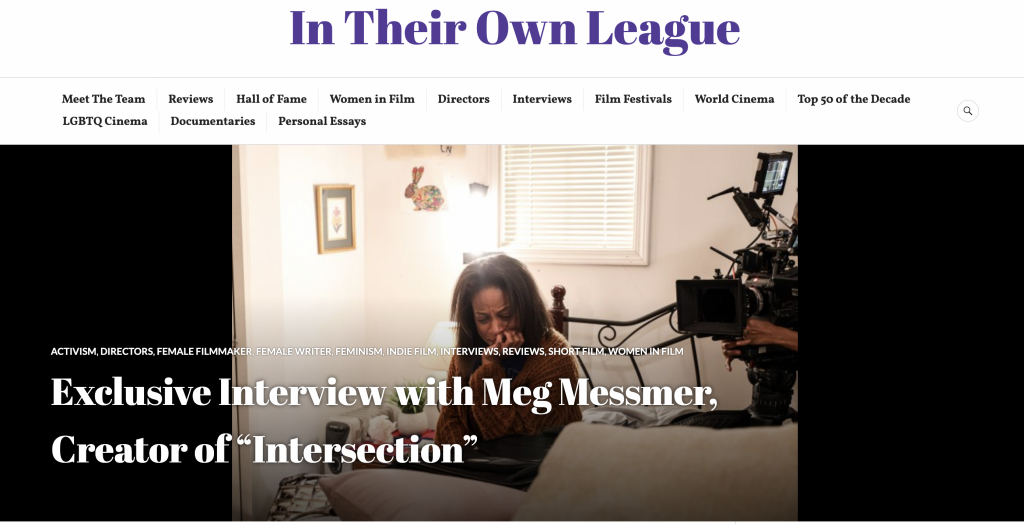 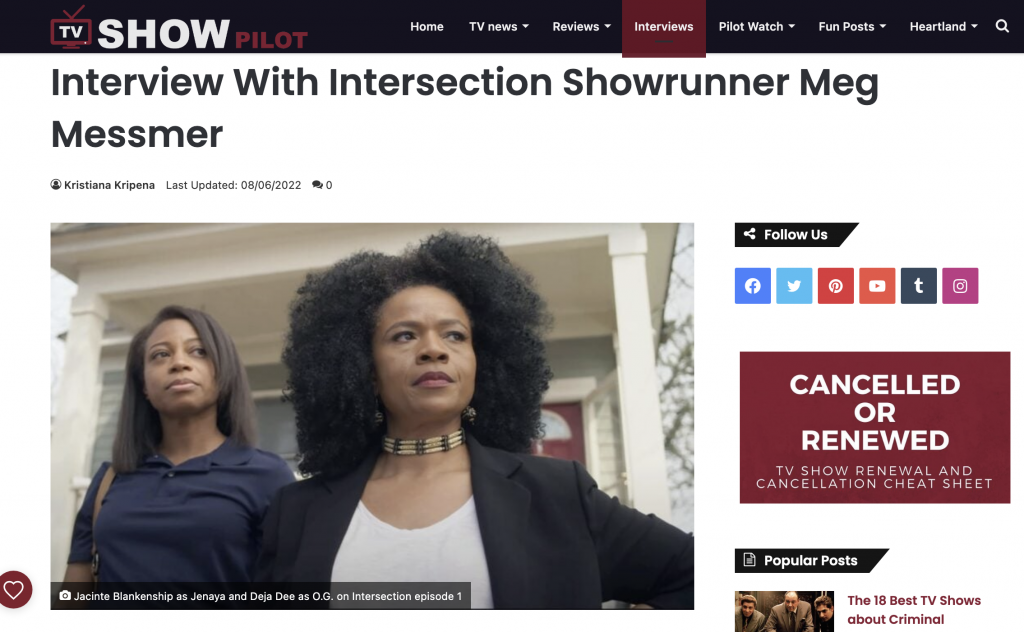 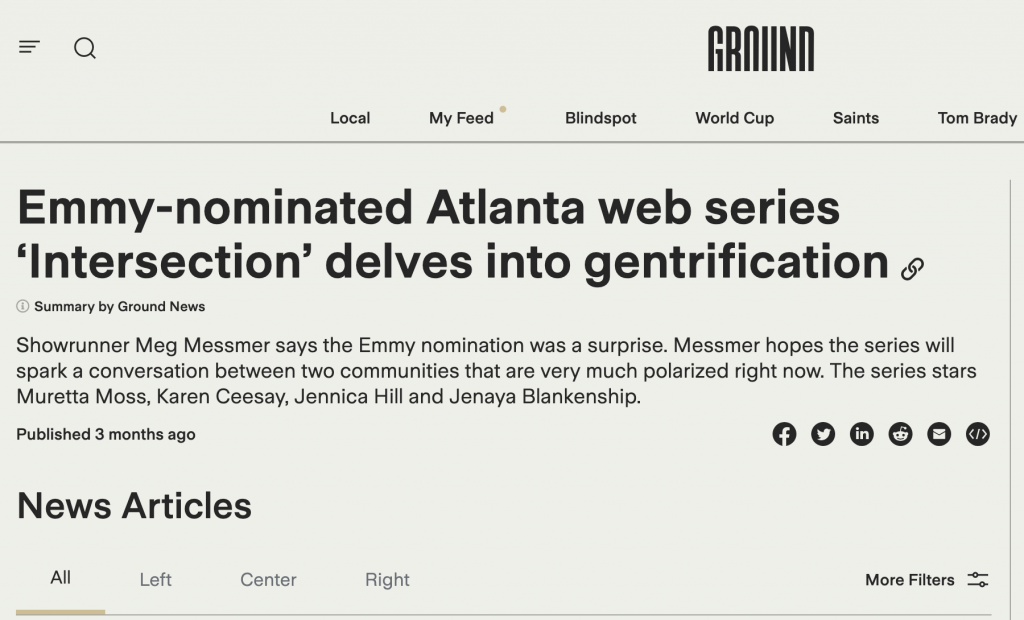 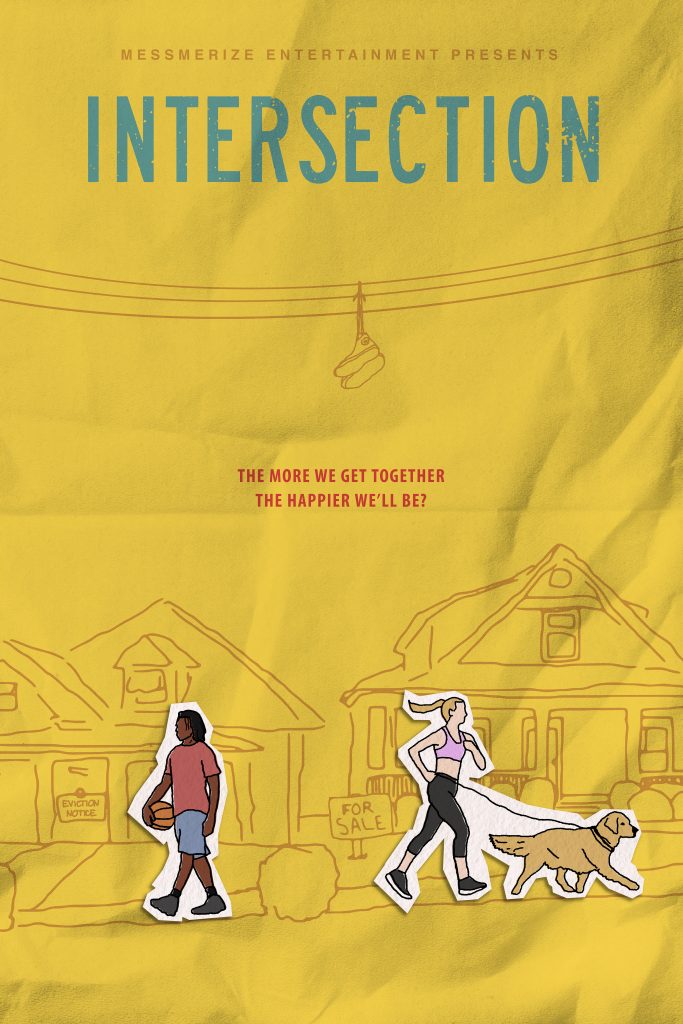 Structural racism has forcefully segregated America’s communities with a tragic history of housing that continues to affect us today. The part of gentrification that forces people out of neighborhoods IS the bi-product of this bad system and it’s bleeding all over the world.

BUT gentrification is also an opportunity for INTEGRATION. Can we finally live together as one community? Black/White/Rich/Poor/Young/Old? Can we fix this broken system? WE HAVE THAT OPPORTUNITY NOW! But there is not a one-size-fits-all solution. We need to have open, hard conversations.

INTERSECTION is a series that puts those conversations on the screen.  In our diverse writers room, we had hard conversations that would NEVER happen outside of it. And yet, these conversation MUST happen in order to progress as good humans. The conversations like: What makes us racist? What makes us privileged? What makes us angry? What makes us gentrifiers? Income inequality? Eviction practices? Rent increases with no caps? White Appropriation and SO many more eye openers that made us laugh, cry, get angry and also hurt while writing this show.

We want this show to spark conversations on both sides. Showing that there is no Black & White answer. Every issue has shades of gray and as we intersect everyday, we can start talking to one another and more importantly listening to each other to understand what we need, what our neighborhood needs and what our city needs. Then, we can create homes that are inclusive and diverse in culture, ethnicity and income level which Jane Jacobs (Author of Death and Life of Great American Cities) is the best kind of city. 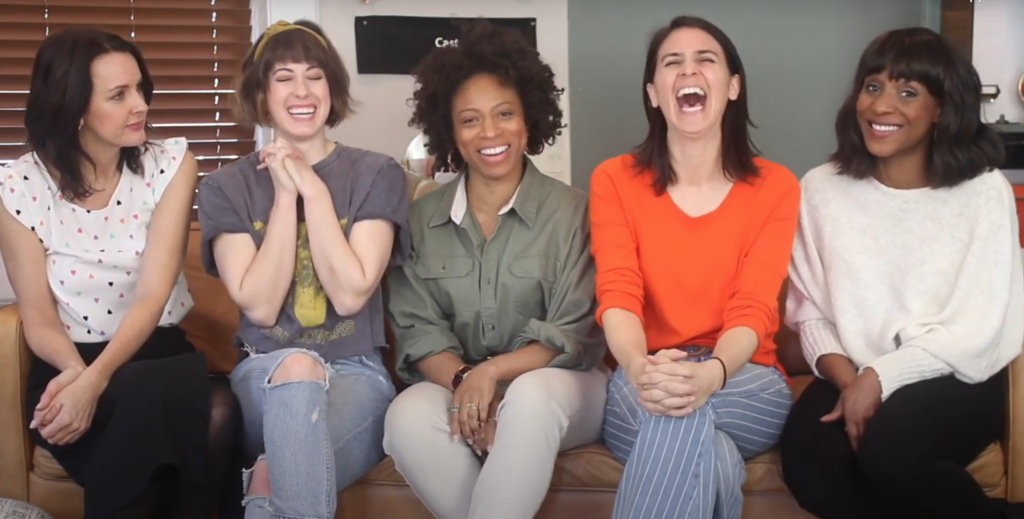 Jacinte Blankenship is an actress, writer and producer committed to the expansion of storytelling inclusive of people of color.  She is a graduate of Clark Atlanta University in the the historic Atlanta University Center, and has been a part Atlanta’s film and television community well over a decade.  Her first project as a producer was Hidden in Plain View, a short film about the human trafficking epidemic in Atlanta, GA.  While attending the Cannes Film Festival, she co-wrote and performed in three short films in collaboration with the internship program Creative Minds in Cannes.  Jacinte has appeared in several television and film productions, including television shows, Mr. Mercedes, and NCIS: New Orleans and films Just Mercy, Get On Up, and The Friend.  Instagram: @jacinteb

Karen Ceesay is an actor/writer/producer living and working in Atlanta, Georgia. A self-proclaimed TV addict since childhood, when other kids were outside playing, Karen spent most of her time watching television and reading the TV Guide from cover to cover when she wasn’t in rehearsal studying dance and theater. Shows like, “The Carol Burnett Show,” “Saturday Night Live” and “The Tracey Ullman Show” helped her define her passion for character work and forged her path to comedy.

Karen moved from her hometown of Philadelphia, Pennsylvania to Atlanta, Georgia to study theater at Spelman College where she earned a B.A. in Theatre Arts. After graduation, she became a regular on Atlanta’s improv scene. This led to a mentorship with veteran television writer/producer Sy Rosen, where Karen began her writing career.

As an actor, Karen has a long resume of successes including The Walking Dead, Stranger Things, Greenleaf, among so many others. On the page, Karen and her writing partner, Andre Brooks (The Boondocks), currently have a TV series in development at Freeform with Laurence Fishburne’s company Cinema Gypsy.

An active participant in the Atlanta Film & Television community for many years, Karen is a member of Georgia Production Partnership (GPP), SAG/AFTRA and served on the Board of Directors for Women in Film & Television Atlanta (WIFTA) for several years, overseeing the chapter’s fortieth anniversary celebration. 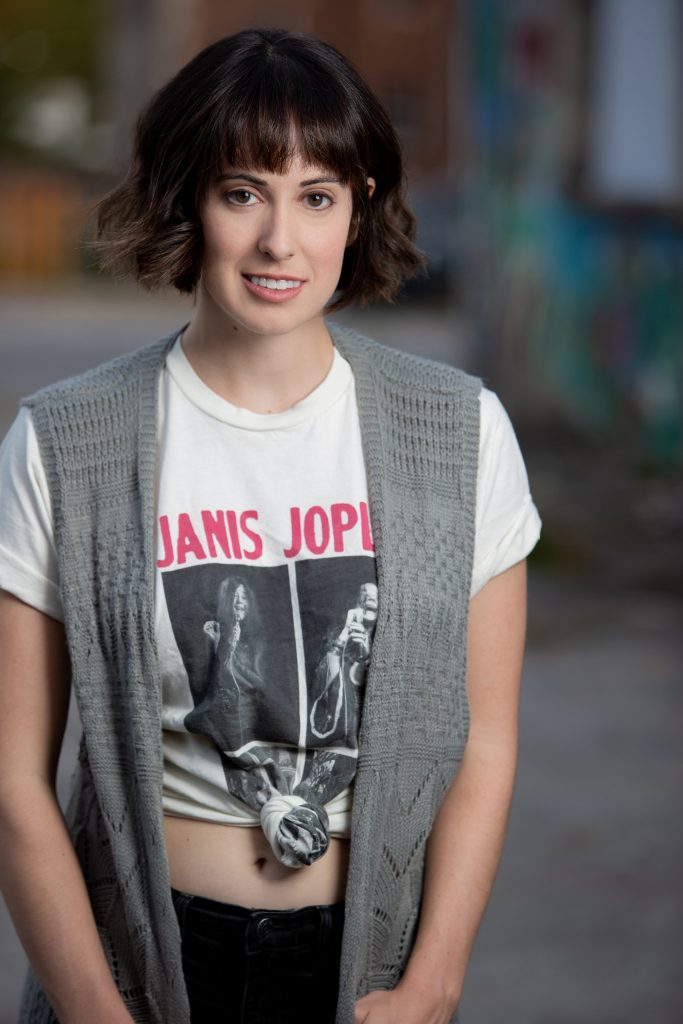 Jennica Hill is an actress, improviser, and writer focused on connecting the world through empathy and storytelling. She is a graduate of the University of Southern California. Shortly after moving to Atlanta, Jennica was cast in Tamlin Hall’s film HOLDEN ON, which has won multiple festival awards and become a nonprofit spreading awareness about mental health and teen suicide. This further ignited her goal to fire on all cylinders and tell stories that help close the gaps between people’s perceived differences and connect them through their universal humanity. 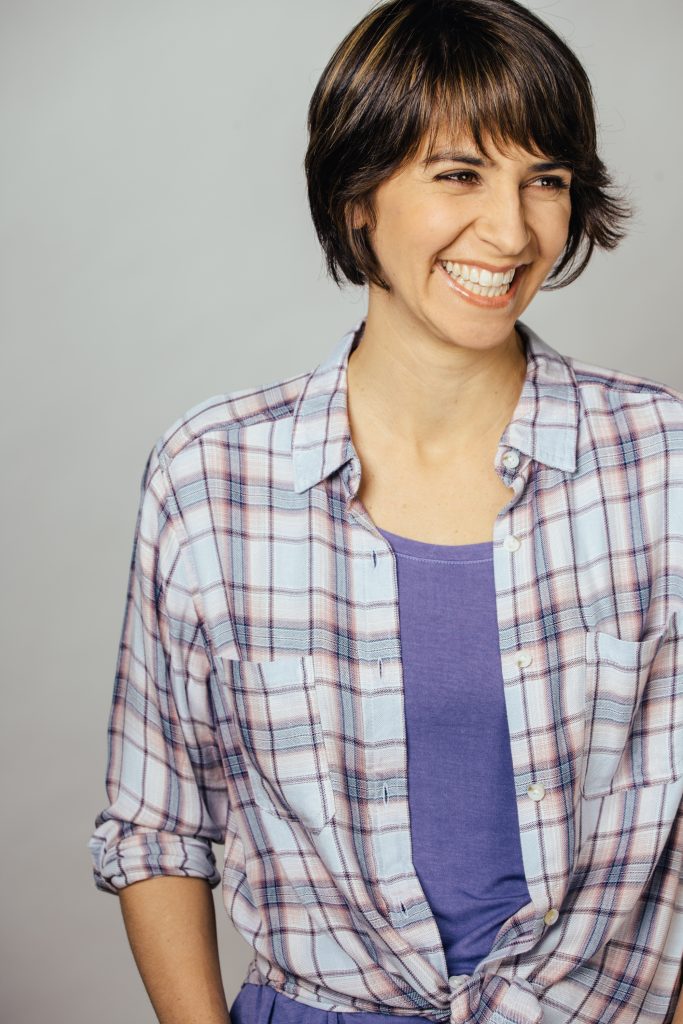 Meg Messmer is a multi-hyphenate creator-producer-writer-actor drawn to mission based projects that raise awareness. Her first project as a producer was a NYC play written by Beau Willimon (House of Cards), Elizabeth Meriwether (New Girl), Pulitzer-prize winner Annie Baker, Sam Forman (Claws) and Billy Eichner (Difficult People). Meg teamed up with the YouthAIDS Foundation and all proceeds were donated.  Meg has worked with Mandeville Films and Paramount Pictures before landing as a production manager for FremantleMedia where she oversaw 26 different shows simultaneously. She attended UCLA’s Producers Program and worked in management at Untitled Entertainment.

Her feature, IMPRISONED, starring Laurence Fishburne was produced with Equitas Entertainment, a company focused on social justice and closing the gender pay gap. Meg worked closely with the director and cast, teaching acting workshops for prison inmates as a tool of anti-recidivism. Meg  produced LAMB, a short film inspired by a side of the #MeToo movement that she personally experienced. Working with Life Out Loud Films, she was able to secure an all-female crew supporting women in front and behind the camera.

Her most recent feature was One True Loves starring Simu Liu and Phillipa Soo, directed by Andy Fickman.

Meg is based in Atlanta and Sweden. www.megmessmer.com  Instagram: @megmessmer 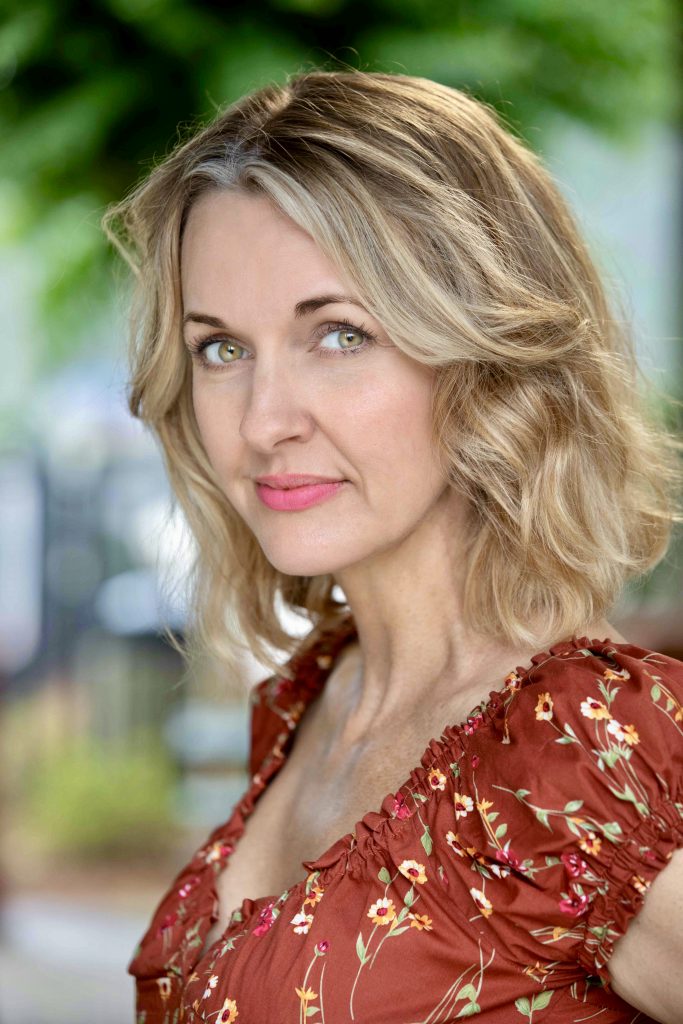 Muretta Moss is an actress, comedian, and writer from Atlanta, Georgia.  She is a graduate of Second City, iO West, Upright Citizens Brigade… oh, and from Georgia Tech and Georgia State University. She can be seen performing weekly at the Village Theatre in Atlanta, Ga in their Mainstage Ensemble, The Improvised Vagina Monologues, and Marcia Marcia Marcia.

A letter from the Showrunner

Hey! My name is Meg Messmer and I am one of the writers and creators of Intersection.

This is a personal story for me that started when I was living in Detroit and I was the only white person in my building. I didn’t think too much of it then, but after a few years, I moved to New York City and I noticed how every affordable neighborhood I chose to live in (Harlem, Clinton Hill and Bedstuy in Brooklyn) would slowly, steadily change.

Yup, for my entire adult life, I’ve been a gentrifier. I’m white. And it seemed like once I moved to a neighborhood, more and more white people came too, along with some other changes: a new juicery on the corner and goat cheese in the grocery store.

When I moved to Los Angeles, I decided to buy my first house. I bought a house with the intention of flipping it in order to build a savings for my future. I’m an artist with no 401K plan. So I wanted to be smart. My retirement plan was going to be in real estate.

It wasn’t until after I sold that house and then couldn’t afford to buy a new one in that same neighborhood, that I started wondering what this buzzword “gentrification” really meant. And more importantly, how I might be a part of it. That was 2012.

Now, that L.A. neighborhood is almost entirely white and the homes sell for well over $1 mil. Detroit is the coolest new place for artists and NYC…well, we all know that NYC is untouchable for anyone except the rich or their privileged children.

In 2016 I moved to Atlanta because, guess what, I was priced out of my own city. I bought a house in a historically Black neighborhood. Let me tell you – the dynamic here in “The South” is different than anywhere else I had lived. Atlanta is the birthplace of the civil rights and also the birthplace of the KKK. The racial tension here is more palpable than anywhere else I’ve ever lived. Finally I was face to face with the long journey our country has to take for racial equality. I started researching and writing.

This series, is my little piece of owning my own wake up call.

But what I’ve also learned about gentrification is that it’s not just a black and white or right and wrong issue. There are SOOO many shades of gray. This series intends to capture all of those and hopefully we can start conversations around them.

Intersection came after 3 years of researching with my co-creators and finding the right team of writers because we knew we could not write this series without the voices of everyone. All of the women (yes, all the writers were women) in the writers room are experiencing gentrification first hand. These stories are real. Most of the situations are based in truth. We can’t wait for you to see it and start the conversation with us.

Director of Episode 1: "THE G WORD"

For the national stage, Avery wrote and produced A Mother’s Prayer and What A Woman Will Do For Love starring Raven Symone, Ann Nesby, Howard Hewett and Lashun Pace. Avery also produced Tom Coles’ Medal of Honor Rag, starring Heavy D, directed by Delroy Lindo and executive produced by Will Smith.

He is one of the founding faculty members of the Cinema, Television and Emerging Media Studies program at Morehouse College in Altanta, GA where he currently serves as Assistant Professor.

Alycia Cooper is a multi-hyphenate actor/comic/writer/producer & director. Alycia began on Magic Johnson’s Late Night Talk Show, The Magic Hour and the UPN Sitcom, The Parkers. From there, she started performing stand-up comedy at night and producing a series of reality TV shows by day. She worked on The Dr. Phil Show and from there, joined the DGA. She wrote and directed the psychological drama short, Trade, which garnered multiple awards, and is currently available on UrbanFlix TV Network. She is currently writing the feature film.

Her second short, Just Us is winning multiple awards at festivals and streaming on several platforms as well as her third film, in which she wrote/directed/produced and starred in, entitled, Fat Stripper,

Alycia’s accolades include being featured in Essence Magazine in 2004 as “One to Watch.” She has released six stand-up comedy albums to date. She has her own Pandora station and can be heard on Kevin Hart’s satellite channel as well as on Sirius Satellite’s Laugh USA Channel 98. She has toured over 20 countries overseas to perform for our men and women in uniform.

Charlie Fisk Produced/Directed her first feature film, The Founders (2017) which won Best Documentary and the Audience Award Feature at its premiere in Atlanta. She was Co-Producer/Editor on Margaret Mitchell: American Rebel for American Master’s on PBS and Man Made (2018), the feature documentary about transgender bodybuilders.

Her narrative debut as Writer/Director, Limerence (2019), won Best Short at RIFF. Her second short Rideshare is currently hitting the festival circuit. She is in post-production on her third short film, and one of her feature film scripts is currently in the Southern Producers Lab. Her IMDB credits include cinematography for FX, PBS, ESPN, TLC, Discovery Channel, Travel Channel, Food Network and OWN.

Got a favorite line from the show? That could be your next t-shirt! Or your mantra for the day as you drink your herbal tea. 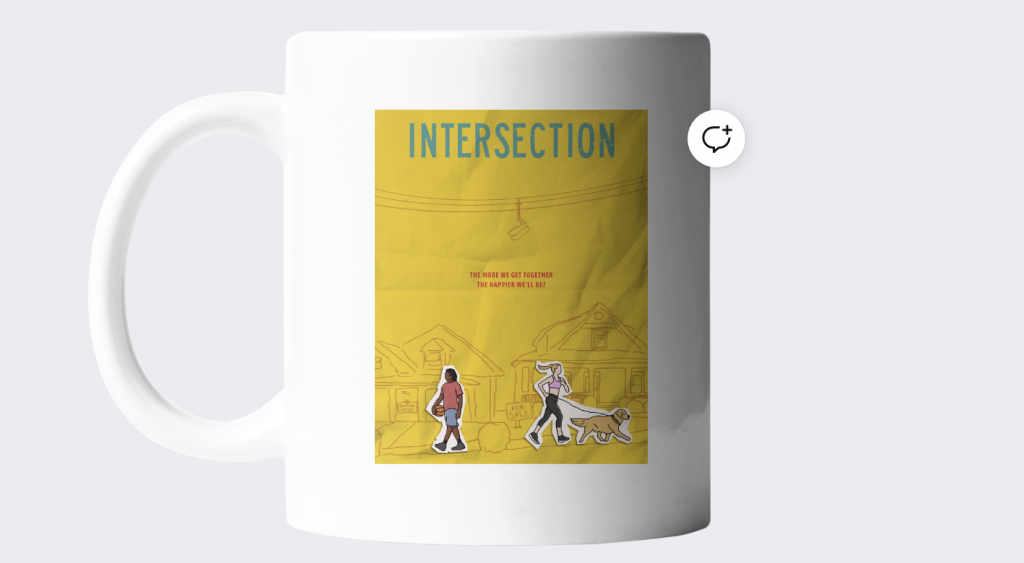 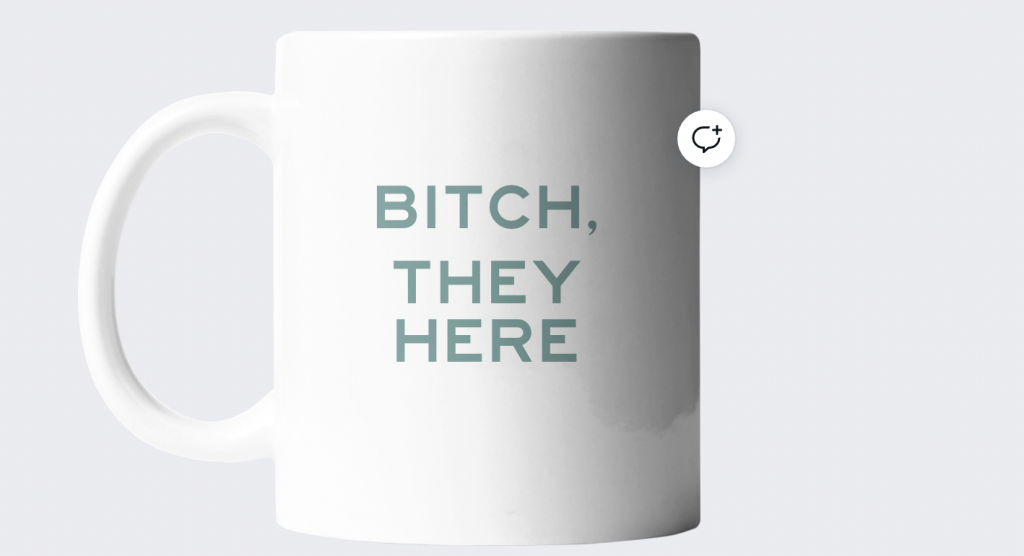 More Behind The Scenes

Take a peek inside behind the scenes of filming. All photos courtesy of Fulani Jabri